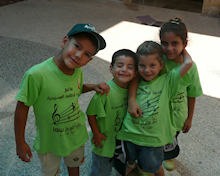 As well as providing plenty of fun, the summer camp serves to heal children from the trauma they have experienced as a result of the ongoing Palestinian/Israeli conflict, whilst building their self esteem and improving their communication skills. The leisure activities also serve to promote social integration and community cohesion, elements which are vitally important if we want to maintain a Christian community in the Holy Land. 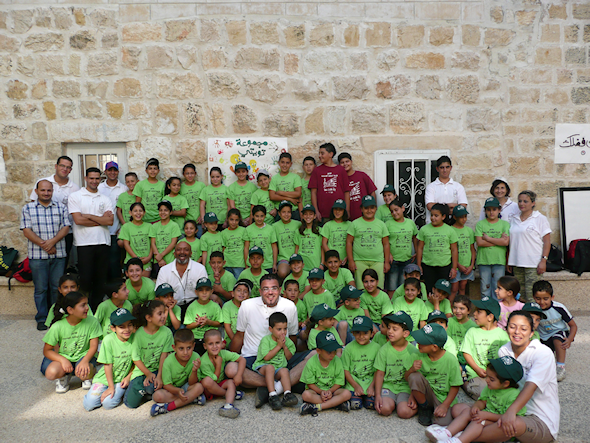 Staff and Students at the Camp

Christians currently make up less than 2% of the population of the Holy Land. During the Pope’s recent visit, he appealed to Christians to stay in the Holy Land, a feat proving ever more difficult as Christians in Palestine endure ongoing difficulties. 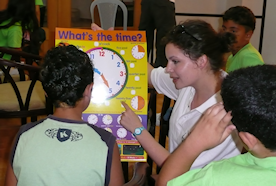 Telling the time in English

My time volunteering in the camp was an educational and cultural one, for both the children and myself. Almost none of the children had ever met an English person before, and many of them jumped at the chance to practise their spoken English and in particular to improve their pronunciation. When I asked them why they felt it was so important to learn English, many said that if they spoke English, they could get a better job when they finished school and would be able to support their family. Their enthusiasm and dedication was infectious and I was only too happy to help. With the use of books, posters, maps, flash cards and activity sheets brought over from the UK, I was able to introduce the children to a different approach to learning a foreign language. We even managed to make it fun!

My first experience of the Palestinian people found them to be kind, generous and very family orientated. It was heart warming to see them coming together to support others in the face of such adversity. I was also touched by the fact that Palestinian children are extremely grateful for the education they receive, something which many of us take for granted in this country. The children are a true inspiration as they realise the best way to change their circumstances is by furthering their education and not through violent measures.”